Writer’s Note: In the next few entries I will be sharing my experiences throughout my 2018 summer road trip. I got a week’s worth of paid vacation, my first at the newspaper, so I am using this time to have a little fun – which, to me, means traveling and discovering new and interesting places. I have split it up into 4 days. Here is the first day. 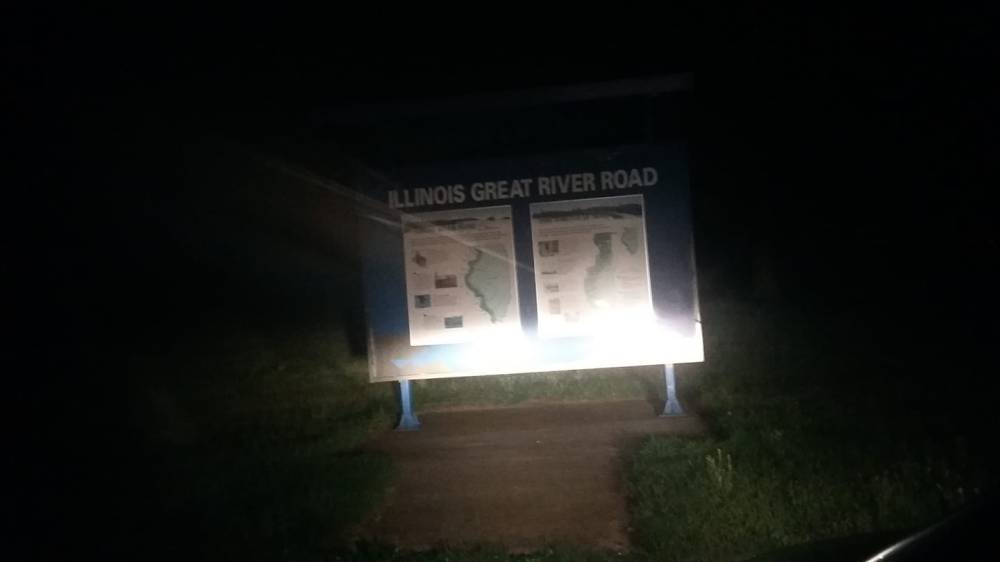 So I thought I’d carry on, and made it through Lomax and into Dallas City. I got to Dallas City, and it is still dark. I had planned on waiting it out for a little bit and when the sun rises, there are a couple of places here that I want to see. However, because it was so dark out, I realized that I overshot one of my destination points about 15 miles back. I’m about to head there now. 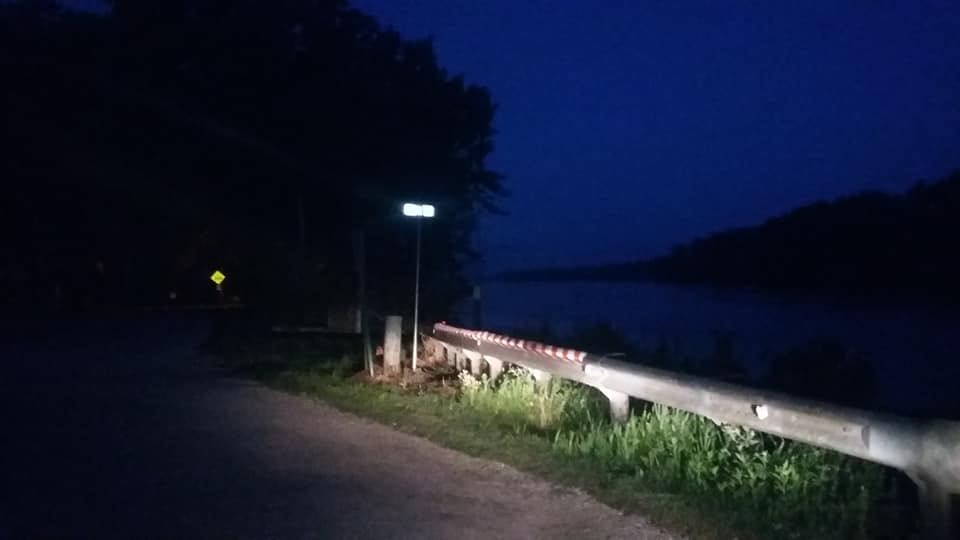 Skokokon – can you feel it? – was Joseph Smith’s second planned Mormon settlement, after Nauvoo. Plans for that to develop fizzled after the Mormons went toward Utah.

9:30 AM – Breakfast at a downtown Quincy eatery, Thyme Square Bakery & Cafe. Didn’t think I’d be here this early, but made it in plenty of time.

I saw A LOT between Dallas City and here. Starting with the Ft. Madison Toll Bridge, my trip made a brief stop in Iowa (so I now plan on 4 states on this trip) so I could go both ways on this bridge. This bridge is the world’s longest double-deck swing span in the world: the BNSF railroad goes underneath Rt. 9. 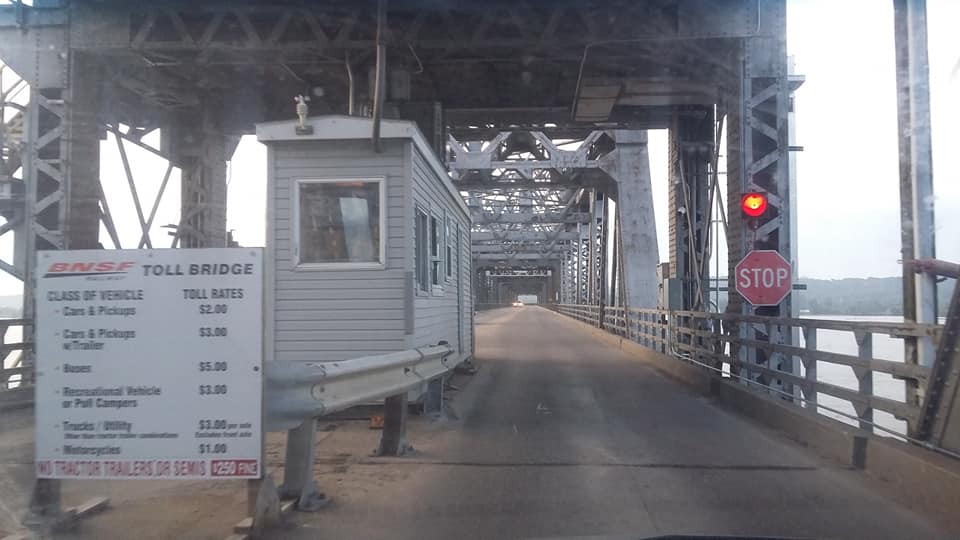 Route 96 from this bridge to Hamilton is VERY scenic. Let’s start with Nauvoo, the Mormon community planned by Joseph Smith. 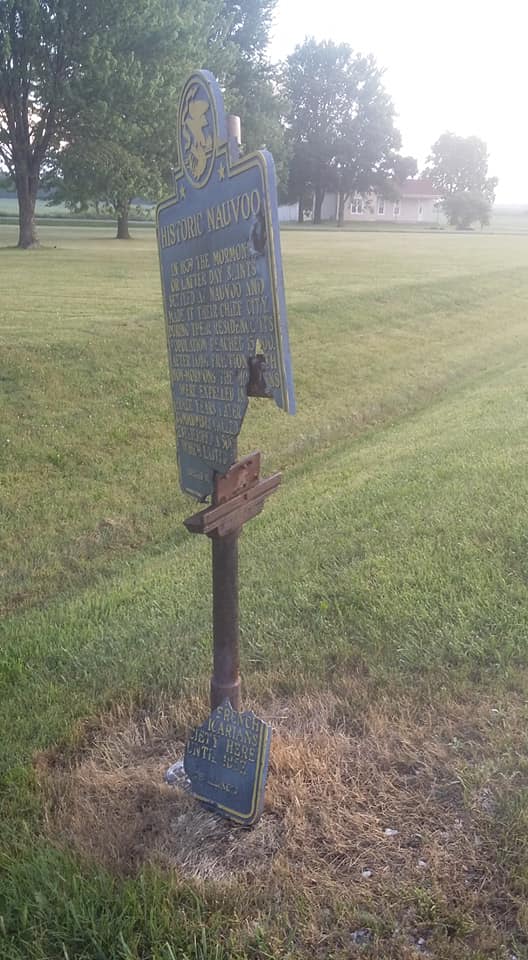 The sign could use a little fixing. I stood the broken piece on the pole.

Coming in from the east side of town, you can rent luxury log cabins. Tourism is the main cash cow in Nauvoo. My grandparents went here years ago and recalled that the locals are always wanting to tell you about their Mormon faith. All. The. Time. I came through at 6:30 a.m. and missed out on the openings of the businesses.

Nauvoo consists of both the modern-day town and the old town. The modern-day town, with its crafty mom-and-pop downtown, is on a bluff above the River bed. So is the Nauvoo Temple of the Jesus Christ of Latter Day Saints.

Here I am taking pictures of these things that are interesting to me, and here come a bunch of men in suits and dress clothes – I feel a little “off”. They have great pride in their building, and the grass around it is nice and green thanks to a sprinkling system.

Down the hill from the modern-day town and the Temple is what’s known as Old Nauvoo. Floods have wiped out most of the buildings, but a few remain. They are preserved as part of the Church’s telling of its story. At first glance it looked like Valmeyer, IL or Prairie du Chien, WI but it is VERY well preserved.

Driving south of town along Route 96, this is one of the Mississippi River’s most scenic stretches of road. Only Wisconsin Route 35 rivals this – I took that once from Red Wing, MN to Holman, Wisc. Along the way, I discovered a pair of historical markers. One of which marked the former site of a town once called Montebello. It was the first county seat of Hancock County.

Nicked past Hamilton and took a road off-the-beaten-path to Warsaw and the Fort Edwards Memorial. Future President Zachary Taylor helped build this in 1812 to aid in the War of 1812 effort. Then I went really off-the-beaten-path on a pair of roads to Quincy.

The Illinois Great River Road (and its accompanying America’s Byways designation) doesn’t always work for scenic route junkies such as myself. This Ziegler Road was more parallel to the Mississippi River than the Great River Road – which is probably because they want to boost revenue in some of the nearby towns.

One town that the GRR doesn’t touch is Meyer. Like Shokokon, this village has most of its houses on stilts – and those that aren’t are rotting away. The social spot in town is a bar on stilts called the Red Dog Saloon.

I’m enjoying the breakfast here in Quincy. This is a Charcuterie Omelet: 3-egg omelet with aged cheddar cheeses, hose-smoked bacon, house-cured honey ham and house-made sausage. The meats are local. 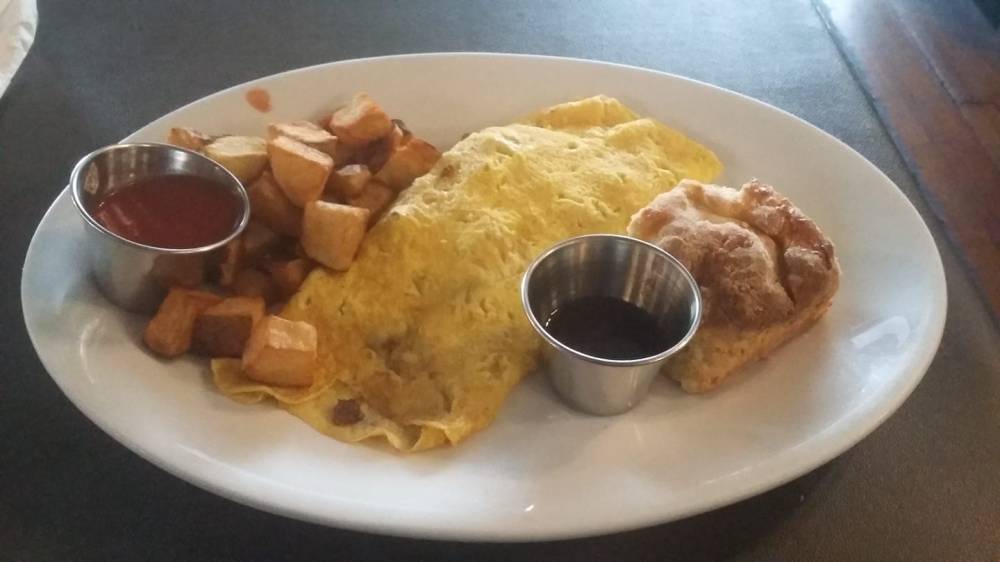 First, I had to make a stop at Hull, a name that is in the family of my Aunt Judy’s best friend Karen and her sisters. I filled up the gas tank once more in New Canton, and then meandered through some deep back roads onto the Mississippi Floodplain. Boring. Nothing new. Then again, I bet Mr. Charles Kuralt came up empty-handed at some point “On The Road.” 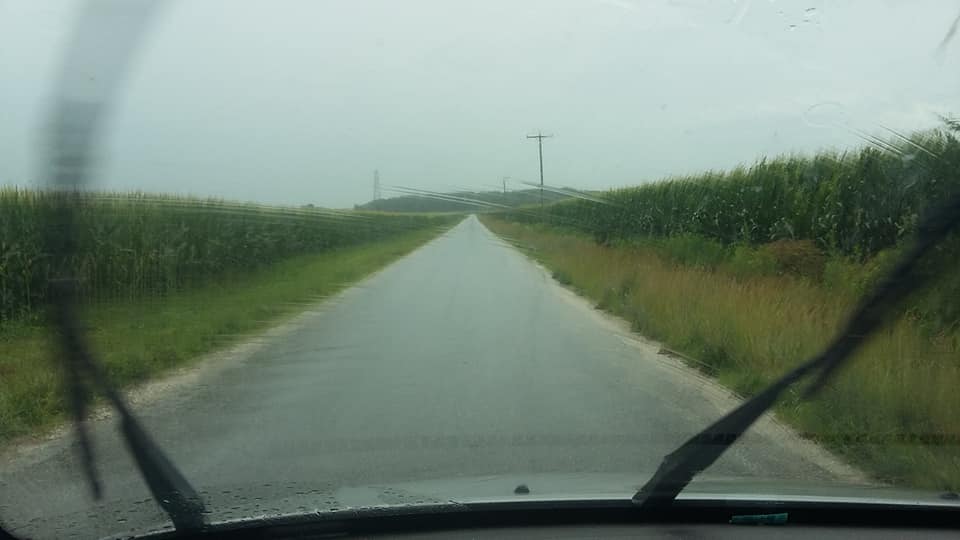 Made it to Calhoun County and the internet on my phone went dead. I had been posting pictures on Facebook before then, and everyone probably thought I ran into the River. Not quite. I was busy meandering through roads that looked like THIS for 40 miles …

Calhoun County is a neat little remote area of Illinois, bordered on the east by the Illinois River and the west by the Mississippi River. The two rivers come together at the bottom to make the county appear like a cone shape of sorts, with the only bridge being at the base. Aside from a couple of ferries, it’s pretty much cut off from the rest of Illinois.

I’m a city folk. Me, my cell phone and laptop computer drove down and I was left figuring out how to weave my way out of there (I don’t carry a map).

Belleview was my first stop. This is pretty much a microcosm of what Calhoun County is like … 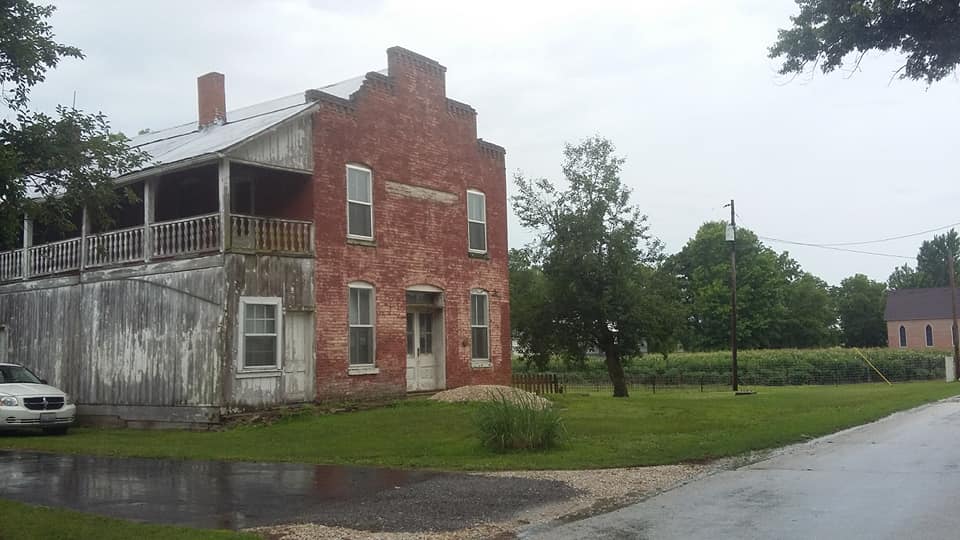 Saw a boat launch site and decided to turn. The swampland nearly came up to the road, and about a half-mile later I saw a man with a large net trying to catch frogs. I kept going and fording water until I couldn’t go any farther.

Hamburg and Batchtown were other towns along the way. Hamburg is along the Mississippi, and the scenery reminded me of visits to Bagley, WI and Buena Vista, IA. Very shaded, close-knit and filled with old frame buildings.

I reached Batchtown and it was just as rustic as the others. It even had a grocery store. Friedel’s Grocery is a small store, but it also serves soft ice cream, sundaes and milkshakes – just like the old downtown grocery stores of the turn of the century.

I couldn’t get WiFi in Batchtown, but I came away with a milkshake.

Calhoun County gets the best out of mental map experts like myself, and it did for me. Going down the same road with no GPS or having never been on the road before, there were points where I said, “Is this Batchtown,” for about 15 miles. “Stop sign?” I’ll admit to getting a little finicky, but eventually I found a road sign that led to Brussels.

I’m here at Brussels right now having a horseshoe. All of the uncertainty while driving made me hungry.

I took the Brussels Ferry across the Illinois River onto the Illinois mainland. I had never been on a ferry before until today. You really don’t feel a thing except for an initial bump.

Once out of the ferry and onto state Route 100, there was a crash blocking traffic. We stayed still for about 30 minutes, and then it started to thunderstorm. Turns out a car ran into an RV.

The rain though … it got heavy enough where it nearly put a damper on the rest of my stops from that point to my motel in Granite City. It turned out that my final 3 stops were each made with some light drizzle when I arrived.

Elsa is a town that looks like it was platted on a bluff hollow. Not much in the town other than old wood buildings. Also visited the Piasa Bird and the statue of Robert Wadlow, both in Alton.

I was in Alton 3 years ago on a schools research trip, and I had completely overlooked both destinations. Wadlow was the world’s tallest man at 8-feet, 11 inches. The statue is a life-size replica of the man (though he is on top of a marble base):

I’m staying near the Chain of Rocks Bridge, which carried Route 66 over the Mississippi River. I have been there twice now, once with my grandparents and once more 3 years ago. I have traveled on the entire length of Route 66 in Illinois, from the Art Institute of Chicago to Chain of Rocks Bridge. If you’ve never done it, I highly recommend it!

Day 2 has me making a couple of stops in St. Louis (breakfast with a friend, and some clothes shopping) before starting from East St. Louis and heading south toward Cairo. Highlights along the way include the Flood Plain, Chester and the Popeye statues, Fort de Chartres, and finally Cairo itself.