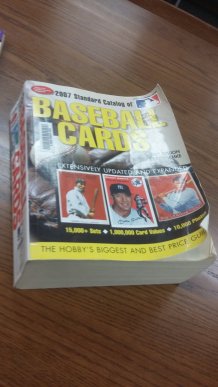 I have received another pile of cards to sort out for the kids. The cards came from former Oregon High School head football coach John Bothe, who sent me a bunch of baseball, football and basketball cards from his middle school days. Thank you, John!

Two baseball cards that stood out were a 1978 Topps Nolan Ryan ($25 in appropriate condition), and a 1979 Topps Ozzie Smith rookie card (book valued at $60).

However, the biggest finds were among the football cards. Rookies of Jack Lambert (1976 Topps, $35), Tony Dorsett (1978 Topps, $40), John Stallworth, and a 1963 rookie card of Cowboys great Bob Lilly with some damage but would book for $175 if in the appropriate condition. Also had a 1963 Topps card of Fran Tarkenton.

I have decided to give John back those single cards that I have mentioned. I don’t feel OK owning these awesome cards after they were unknowingly given to me, so I let John know that he can have them as memories of his card collecting days.

Some cards from this collection are finds from my Want List. I’ll update that only after I rearrange my collection of good cards.

Right now, I have about 2,600 cards stored in what I consider my Shoebox Collection – that’s the “every-team-a-star-has-played-for” and more collection. After thinking about it, I’d like to have these cards in albums and album pages. I’d have to put them in alpha order by player’s name in order to better find specific cards. I’ve gotten a lot of late 1970s and early 1980s Want List finds that I couldn’t keep track of them anymore.

However, I need about 200 9-pocket album pages and 4 of five binders to make this happen. They would add to the two binders I already have for my extra-special cards.

Call me stupid, but …

When I was collecting regularly, I used to make up my own card prices by weird, arbitrary ways. Really.

Beckett magazines don’t list all of the cards. So when a lesser, oddball set from 1987 Fleer came into my collection, I used to think that they couldn’t be any cheaper than the base card set. Same with 1984 Donruss All-Stars. Nope.

And for some unforsaken reason, I used to think that Donruss Baseball’s Best had a slightly higher premium than the regular Donruss base set. Having memorized Beckett’s individual card “pricing tiers”, I thought a 60-cent card from the base set was worth 75 cents because the common card was 10 cents.

Luckily, I stumbled upon a Sports Collectors Digest price guide from 2007 at the Library in Morrison. The big book (pictured above) is 2,000 pages, and contains just about every regular and oddball set there was as of 2007. I am now going through the cards in my binder and correctly pricing these cards. I HIGHLY DOUBT the values of my cards have changed since 2007.

But wait … SCD has unusual card prices such as 35, 45, 65, 85 and 95 cents – values which are no longer used by Beckett. In addition, their pricing tiers by player do not match with Beckett’s on occasion (Wade Boggs is higher than Rickey Henderson, according to SCE – it flips in Beckett). So I’m having to convert SCE values to Beckett values, and it’s a complete mess.

Why such a fuss?

I’m still trying to sort out my recent acquisitions by team. After that, and breaking a 5,000-card box into teams, I figure to have at least 500 cards for every team (sans Marlins, Rockies, Rays, D-Backs, and Nationals). If there are 16 kids on a T-ball team, and I give them 7 of the team they are on, plus 3 more from other teams, the current stash should last a couple of years.

Because I’m getting cards at a time by specific year, the stack of cards per team has sweet spots of consecutive cards from the same year. Rather than dole out 7 cards of 1978 Dodgers (6 of which are of Dusty Baker), I need to find a way to shuffle the cards up for each team – and NOT the way we shuffle playing cards.

So that’s all for now.