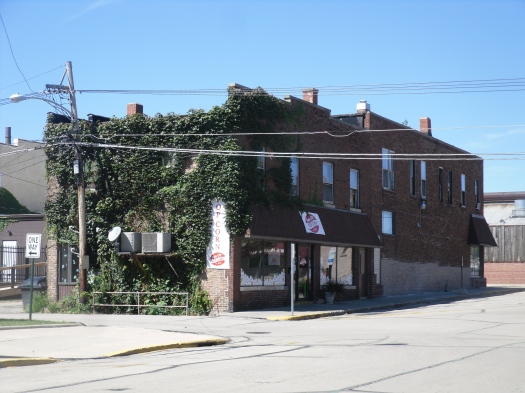 The former 1st and 10 Sports Shop on 2nd Avenue in downtown Rock Falls.
Today, it is a popcorn store.

Downtown Rock Falls was only a few blocks away from where I lived (corner of 3rd Avenue and 5th Street) during the bulk of my grade school days.

There weren’t really any stores worth visiting. The first one that came to mind was a sports card store called Gold Glove. It was located next to Cardwell’s on 1st Avenue. However, it was “across the highway” and that meant hoping no one I knew would notice. The only cards I remember buying there were old Dennis Rodman ones from his Piston days – he was popular at that time and the cards didn’t have his dyed hair. I thought it was unusual and bought them.

The store that would eventually run Gold Glove out of downtown Rock Falls was called 1st and 10. It was run by sisters who were huge Viking fans: Connie and Cynthia.

1st and 10 was located right next to the RF Post Office on 2nd Avenue. The store was a small barber shop before that. It had been there for a while before I peeked inside one day and they were selling sports cards.

The first card I bought there was a Cal Ripken (1992 Donruss Triple Play) that sold for $1. The card is still $1 today.

When I was young, I collected baseball cards. When I began to be interested in football and basketball, I started collecting cards of those too. I had a lot of them, to which I kept a numberic inventory of them.

I noticed that 1st and 10 had something called a “dime box.” Single cards for just a dime. This was my chance to stock up and show them off. So I’d save my dimes and make constant trips to the store to see what was in the box of neatly sorted cards. That, and it was also where the latest Beckett card pricing guides were sold.

It became my after-school trip. I’d walk the block home from school, drop my bookbag on the back porch and tell my aunt (who babysat Chris and Dan) that I was going to the card shop. I’d walk from my backyard onto the alley and cut across the yard of this big apartment house (actually walk on the top of a stone wall that divided the apartment lot and Pinkston’s house) and onto 2nd Avenue.

You’d walk in the front door and have to walk to the right, through another door, to get in the store. The front counter was right there and was sort of U-shaped. Shelves of wax packs were along the wall behind the counter, and if you wanted one you’d have to tell them and they’d give you the box to pick your pack. Off to the right on the glass counters, next to the store’s front window, were the baseball, basketball and NASCAR cards along with the dime box. Off on the left side of the front counter were the football cards.

On the other side of the football cards was an area filled with football stuff: clothes, footballs, coozies, hats, and things like that. Finally, right next to the front door was a door to another room where more stuff was located.

I never had the money to buy anything other than cards, and packs of cards.

I became such a regular customer there that they start letting me help out with the store. One day, they recieved a whole bunch of cards and they needed help sifting through them to see what was worthy of the dime box. I was the dime box expert, so I helped out. They didn’t want to sell any “commons”. For my couple of hours’ worth of work, I was paid a pack of cards from the 1996 Collector’s Choice Update set.

The pack of 10 cards was worth 99 cents. This was the first set that I truly wanted to build a complete set of. The rookies that year? Eric Moulds, Marvin Harrison, Lawrence Phillips, Simeon Rice, Ricky Dudley, Mike Alstott, Tim Biakabutuka, Eddie George, Terry Glenn, Keyshawn Johnson, Karim Abdul-Jabbar, and Terrell Owens. I think only 5 of them had noteable careers.

Back to those “commons.” We put something together called the “grab bag” where we put 20-25 cards in a brown bag and wrapped them up and sold them for 50 cents.

The 1996-97 football playoffs were special because the two expansion teams (Panthers and Jaguars) were in the conference title games along with the Packers and Patriots. I had to find all of the store’s Panther, Jaguar, Packer and Patriot cards and seperate them from the rest. We sold those cards for a quarter at the time. That was also the first Super Bowl that I chipped into a scoring spreadsheet. They had to explain to me how it worked, and at first thought I was too young to be doing this.

I also remember taking a caculator and doing an entire inventory of the whole store – something Autistic that I can’t seem to explain.

I was just one of the regulars. A guy named Duane (a Cowboy fan) and his son (whose name I forget) were also regulars. The son may have stolen cards. One story I remember was when these SP-X football cards were made (die-cut in the shape of an X) and he “just found them” on top of of the stamp machine at the Post Office.

The best pull from a pack that I found was a Topps Chrome rookie of Eric Moulds. That set of rookie cards for some reason became real expensive, and I wound up selling it to Home Plate sportscards in Sterling for $20.

I would go there rain or snow. One day I was determined to go there when it was real cold and snowy. I walked in and nearly fainted when I met the warm air. On these days, either Connie or Cynthia would drive me home after closing time.

On one winter day, a huge fight broke out at the Corner Tap that spread outside. It all unfolded just outside our window.

The fun ended when I moved to Sterling in May of ’97. Connie and Cynthia liked me so much that they were saddened when I told them I was moving, and wasn’t allowed to cross the bridge. The last month of living in Rock Falls was like the building end to a TV series finale.

1st and 10 eventually moved next to Arthur’s in Rock Falls for a while before relocating to downtown Sterling, where they were at in 2004. When I worked for the newspaper, I wrote a column about baseball cards that got their attention. They still remember me to this day.

When I was in school, the following of professional sports was huge on the second floor of Merrill. Locker after locker was filled with colored sports logos that Mr. Stralow had copies of. As much as I was around sports logos at 1st and 10, I didn’t have one on mine. I hated coloring because I could never get within the lines. (One of those “Doug” moments where I thought people would laugh at me).

Teachers like Mrs. Vanderlaan, Mr. Stralow and Mr. G at Merrill helped build what would become Rock Falls’s sports culture. Just a couple of years after I moved, Brian Vance made “the shot.” The summer I moved, 12 young girls (many of whom are great friends of mine) won a little league state softball title and strung together many more.

I’d say 1st and 10 was instrumental in keeping a professional sports presence alive in Rock Falls, which helped influence all of this.